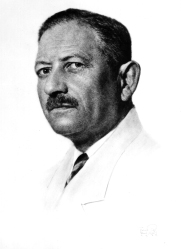 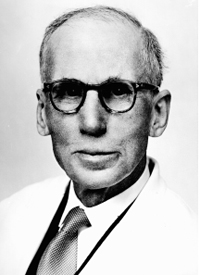 The old moulage collection was located directly next to the lecture hall of the Dermatological Clinic.

Foundation of the Dermatological Clinic

In 1916, Bruno Bloch from Basel was appointed the first professor for skin and venereal diseases and director of the newly founded clinic in Zurich. From the facilitiy loan he wanted to obtain "moulages and material for the production of moulages" for 3000 Swiss francs. Moulages were an important teaching aid in lecture halls and Bloch had already come to appreciate the collections in Vienna, Berlin and Paris during his training. In 1922 he wrote: "A dermatological clinic without its own collection of moulages and without the possibility to have the practically or theoretically important cases shown in the form of wax moulages is not complete"

Due to the First World War, the Lotte Volger (1883 - 1956) had come from Germany to Switzerland in 1918. She had learned the moulage technique in Berlin from Fritz Kolbow (1873 - 1946) and subsequently began to build a dermatological moulage collection at the Zurich clinic. In the new building of the Dermatological Clinic, completed in 1924, the moulages were stored next to the lecture hall and could be used during lectures upon request.

Under Paul Clairmont (1875 - 1942), the director of the Surgical Clinic, moulages of surgical clinical pictures were commissioned in the years 1919 to 1927. About 500 surgical wax moulages were produced by Adolf Fleischmann (1892 - 1968). Fleischmann was employed at the Cantonal Hospital as a scientific illustrator and was trained by Lotte Volger as a moulageur for this purpose. Surgical moulages are a rarity that exist only in Zurich and Paris.

The moulage collection also profited from the support of Guido Miescher, Bruno Bloch's successor as director of the Dermatological Clinic, who left no doubt "that moulages are of great didactic and scientific significance".

In 1956 Ruth Beutl-Willi resigned for family reasons. With the help of Guido Miescher, she had found another student of Lotte Volger abroad: Elsbeth Stoiber (1924-2014). Under the new clinic director Hans Storck, Elsbeth Stoiber temporarily worked in India during the 1960s, and fabricated moulages of cases of leprosy and other tropical skin diseases. In Zurich, she introduced an exhibition of selected moulages in the lecture hall, which were coordinated with the previous lecture. The lack of space in the Dermatological Clinic meant that the moulages which were previously located on the ground floor of the clinic had to be cleared away and stored in the cellar. There, the collection was rearranged several times and served the medical examination candidates for self-instruction and exam preparation. On request, there were also guided tours for the nursing staff.

Improved colour photography and the possibility of Eidophor projections in the auditorium more and more replaced the moulages and they became increasingly forgotten.

During the 1960s, moulages were eliminated from lecture halls worldwide due to the improved possibilities of colour slide projection and television transmission. A moulage collection is much more difficult to maintain and expand than a slide collection – let alone the large space it requires. In the 1970s, the moulages in Zurich were forgotten by doctors as well, and the intention was to pass on or even destroy the space-consuming objects. In 1972, Elsbeth Stoiber was commissioned to throw away all dermatological moulages. Fortunately, she did not carry out the task, but worked with great energy to rescue and preserve the valuable objects.

Urs W. Schnyder, Director of the Clinic of Dermatology in Zurich from 1979 to 1991, and Elsbeth Stoiber both supported the curator of the Medical History Museum of the University of Zurich, Urs Boschung, to create a special exhibition in the Medical History Museum on the subject of "Medical Wax Creation" in 1979. Above all, the exhibition was devoted to the now extinct moulage art. It marked the beginning of a renaissance for wax moulages in Zurich. In a slide show by Elsbeth Stoiber, the previously secret technique of moulage fabrication was presented for the first time.
In the following years, interest in moulages grew. Film contributions were made, publications about the works of Elsbeth Stoiber appeared in the press and wax moulages were exhibited at congresses (Sylt, Berlin, Pavia, Zurich). Upon request, the moulages could be studied in showcases in the old heating cellar of the Clinic of Dermatology by state examination candidates, assistants and nursing staff. A large part of the moulages was temporarily handed over to the Institute of Medical History for storage. (In the course of the reorganization of the Institute for Medical History in Zürich these moulages were re-incorporated in the collection of the Museum of Wax Moulages.)

In 1984, the surgical moulages produced by Adolf Fleischmann and previously stored in the Surgical Clinic were saved from destruction, relocated to the cellars of the Training Centre (formerly Anatomical Institute) and later integrated into the collection. Finally, the Dermatological Moulages with the showcases from the Dermatological Clinic were newly installed in the basement rooms of the training building (Gartenhüsli) of the University Hospital and guided tours to moulages and epitheses were offered. A large part of the restoration work on the surgical moulages begun in 1990 was carried out by Günter Siemiatkowski from Dresden.

In 1993, a modern, well-equipped museum room offering space for approx. 600 moulages was opened at the University Hospital Zurich, Haldenbachstrasse 14. In addition to the moulage collection, this building also housed the epithetics department, which had evolved historically from the moulage department.

The over 1800 wax moulages in the collection at the time were rearranged and around 600 of them exhibited by the emeritus professors Urs W. Schnyder (dermatology) and Heinz Eberle (surgery) in the new museum. Initially, the museum was open once weekly for students and the public. A colourfully illustrated catalogue of moulages was published for this purpose.

In 1994, the Department of Epithetics was separated from the Moulage Department and headed by Dr. med. dent. Gerolf Gehl was assigned to the Department of Reconstructive Surgery. Following Elsbeth Stoiber's resignation in spring 1999, Michael Geiges took over the conservational tasks after she had introduced him to the technology of moulage production in previous years.

The Museum of Wax Moulages has been a member of the Zurich Museums Association (VZM) since 1996 and of the Swiss Museums Association (VMS) since 1999. The opening hours have been extended to twice-weekly, and the museum provides abundant information on medical and historical aspects of the moulages on display. Guided tours on request take place all year round.